Behind the gates it's not exactly diverse, I mean, there's one asian family that we only see when trick or treating at halloween and that's about it.  We are like the freaking United Nations in this house compared to the rest of the neighborhood.

So my husband is Colombian, I mean he's COLOMBIAN, like the male version of Sofia Verarga Colombian.  He is also from Barranquilla and has the same accent and temperament, I know, hilarious!

That being said, when we first moved in we did a lot of work organizing boxes in our garage & outside, and when I say we I mean Juan. Neighbors would go by and see me with my flaming red hair and burst-into-flames white skin ordering around the tan hot guy and you could see it in their faces "Handyman? Husband? No, no, no, he CAN'T be her husband, must be the handyman." After a while the neighbors next door, you know Mitzy & her nameless husband (I'll think of something to call him eventually) finally realized the ethnic guy waving to them every day lived next door and wasn't being friendly in the hopes of being hired. The nameless husband actually started to wave back.

**Note: these people have yet to ever say a "hello", "Hola" or even wave at me. I am assuming they think the myth that redheads have no souls is true.... and they may be right**

I am pretty sure a few of the neighbors still mistake Juan for their gardeners.

Mom of the Year 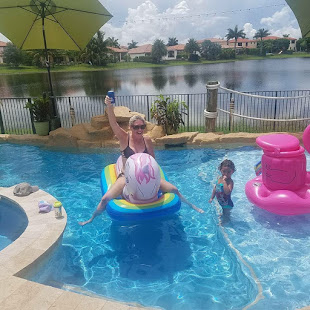